Michael Busse grew up in a large Italian family, one of five siblings, in New Jersey. Family meals were a central part of life for the Busses; Michael learned the fundamentals of preparing food for others from his mother and knew at a very young age that he wanted to be a chef and own his own restaurant.

“Preparing meals always has brought me much joy and it still does!” Michael explains. “I was very fortunate to have a family that taught me so much about food and showed me the meaning of good work ethics.”

Michael sharpened his skills at the Academy of Culinary Arts just outside of Atlantic City and became the head chef for an Allendale, N.J., restaurant owned by Larry Parachini. In 1994 Michael, his new bride Traci, and Larry took their show out West and opened Garlic Mike’s on the banks of the Gunnison River.

In the years since, Garlic Mike’s has become an irreplaceable staple of the Gunnison Valley’s robust culinary landscape. Michael developed many of the recipes for the restaurant and oversees his culinary team. He’s been involved in the wildly popular Tour de Forks dinner events and Garlic Mike’s has been featured on the Travel Channel’s Food Paradise as well as the Cooking Channel.

Traci, who studied fashion design in college and worked in the industry in New York City prior to opening Garlic Mike’s with Michael, oversees wine and liquor selections for the restaurant — her seasonal drink menus have become the stuff of local legend — as well as handling the business side of the enterprise. The couple bought out Mr. Parachini in 2000.

Wanting to better utilize their unique and pristine location on the banks of the Gunnison River, in 2017 the team opened The River Bar out back of the restaurant. Added was comfortable riverside seating, a cozy fire pit and a repurposed/reclaimed shed constructed into a bar under the co-supervision of Gunnison High School’s Shop Class Michael and Traci’s oldest son, Josh.

In addition to featuring an eclectic international selection of appetizers, small plates, desserts and specialty cocktails, The River Bar hosts live music most Friday evenings throughout the summer season.

Dining at Garlic Mike’s combines culinary elegance set in a casual dining atmosphere, making it the perfect gathering spot for special occasions or simply a night out with friends or family. And there’s Michael, at the center of it all, making sure people experience the pleasure and satisfaction of sharing a great meal together — just like he did as a youngster in his mother’s kitchen. 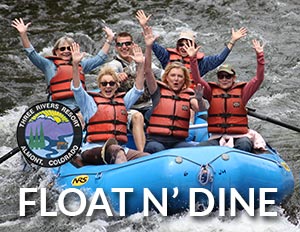